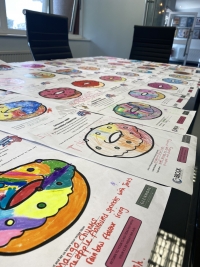 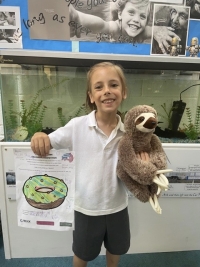 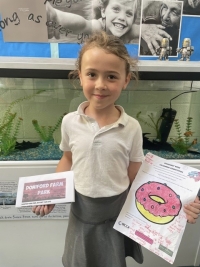 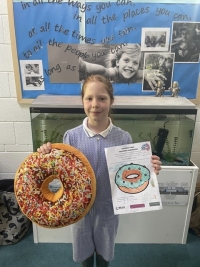 On Monday we were delighted to present the prizes of our National Doughnut Week colouring competition in partnership with Glenmore bakery in aid of Children’s Trust, at a local primary school, Knights Templar in Watchet.

During National Doughnut Week we ran a colouring competition which involved the children designing their very own topping and filling for their doughnut. We had over 200 entries, which made the judging process almost impossible as we had so many excellent entries to choose from. Reluctantly, we selected 3 winners, but we couldn’t resist throwing in another winner, for the most original doughnut recipe.

Arriving at the school on a Monday morning was the perfect recipe for any Monday blues. We were greeted with a big cheer as the children sat in assembly in anticipation of the winners. We also worked in partnership with Glenmore Bakery who supplied doughnuts for all the children to enjoy during their last week of term. Presenting the prizes was a joy as the children bounced to the front to collect their prizes.

On behalf of everyone at Brook Food, we want to say a HUGE thank you to all the children who took part and the staff who helped us make this work. We raised over £100 for Children’s Trust and we look forward to doing it all again next year!