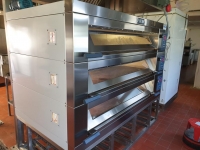 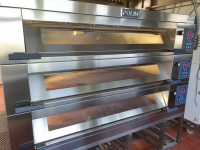 Dan Nemeth of Seasons Bakery has been the proud owner of a Polin deck oven for 3 years and is this week having his second brand new one installed.

Following the government’s lockdown announcement in March, Dan had to quickly diversify. His team worked  closely with their vegetable suppliers and turned his shops into small farm shops offering milk, pasta, fruit and veg at cost to help the local communities where the big stores couldn’t. Dan says “We’ve been selling out of bread daily as well as producing thousands of loaves for charities such as Brick… we knew instantly we would need a new Polin oven to keep up with demand”.

Talking about his first Polin oven, Dan said; “I chose this oven for consistency of product mainly. The glass doors have made a massive difference in comparison to our previous oven, in being able to watch the product as it bakes... The quality of the bake is the best we’ve ever had.”

Last year, Dan won the Green Apple award for energy saving and low carbon footprint. "A huge factor as to why we won the award was because we’ve changed to this oven.” We asked Dan if energy saving played a part in his initial decision to make the switch and he said “Yes, massively. The oven has actually worked out as being free, it’s paid for itself through energy savings. We’ve worked out that we save between £3,000-4,000 per month on electricity due to changing to the Polin.”

Dan says it runs at approx. 10kw per deck including use of the steam function, which is less than half the consumption of his previous oven from a different manufacturer. This improvement has lead to his electricity bill decreasing by over 50%. He says the time taken to heat up is considerably fast, and new, high quality glass has proved reliable and durable throughout it’s constant heavy use.

“We know other bakers having to arrive at work an hour early just to heat their ovens but ours only takes 20 minutes. By the time you’ve got yourself a coffee and brought your sourdoughs out to bake, your oven’s up to temperature. It retains its heat extremely well too, with the glass doors you don’t need to open each deck to check bake progress so you don’t lose any heat at all.”

Dan kindly invites anyone looking to trial the Polin deck oven to come to his bakery in Ingleton.

The latest oven is a 3 deck, 9 tray model that should boost production of bread and allow the business to meet the demand they are now trying to meet. Each of the decks will soon be producing the bakery’s loaves including the very popular beetroot sourdough sourdough after the oven installation this week.