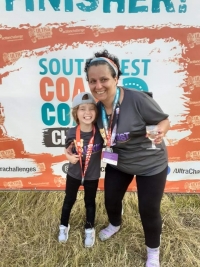 The continuous walk was no small distance of 102km from Minehead on the south bank of the Bristol Channel, down to the seaside town of Dawlish on the southern coast of Devon, with the ups & downs of Exmoor, some magnificent views, the meandering Exe Valley , and the city of Exeter in between.

Walking during the day at that distance is tough in itself, but in the early hours is no easy task. A 20 minute power nap on very uncomfortable terrain was all Samia needed to keep her going. A true testament to her dedication and determination to complete the walk.

Samia completed the walk in an impressive 35hrs 47 mins and 44 secs with no overnight stop! Go Samia!

Samia said: “The walk was a mental and physical test of endurance which included walking from 7am until 6.45pm the following day over tough terrains. Despite training for the walk, nothing can prepare you for the continuous amount of hills we had to climb up and down, but it was all worth it once you cross that finish line”

The walk was in aid of the charity UKIST ( UK Infantile Spasms Trust ), ukinfantilespasmstrust.org, which Samia is one of the Co-founders and Trustees of, following her own daughter Jorgie' s diagnosis. This is a charity we at Brook are proud to support and as a team want to say a massive WELL DONE!

Samia has raised over £1000 so far but there is still the chance to donate. Take a look at her fundraising page; https://uk.virginmoneygiving.com/SamiaSanders .

Every single penny raised goes straight into the charity and throughout the last year they have been able to offer a lifeline for many families through online support. Plus through their grant scheme with specialised therapies including speech and language, physio and occupational therapy, whilst NHS appointments have been hard to access and also specialised equipment for families who struggle to afford the equipment that often carries a hefty price tag simply because it is “specialised. ”

Once again, WELL DONE Samia from all of the team at Brook Food.